Sniffing the Past is pleased to present its second guest contribution. David Doddington sheds light on the history of dogs and slavery, drawing heavily primary source material. 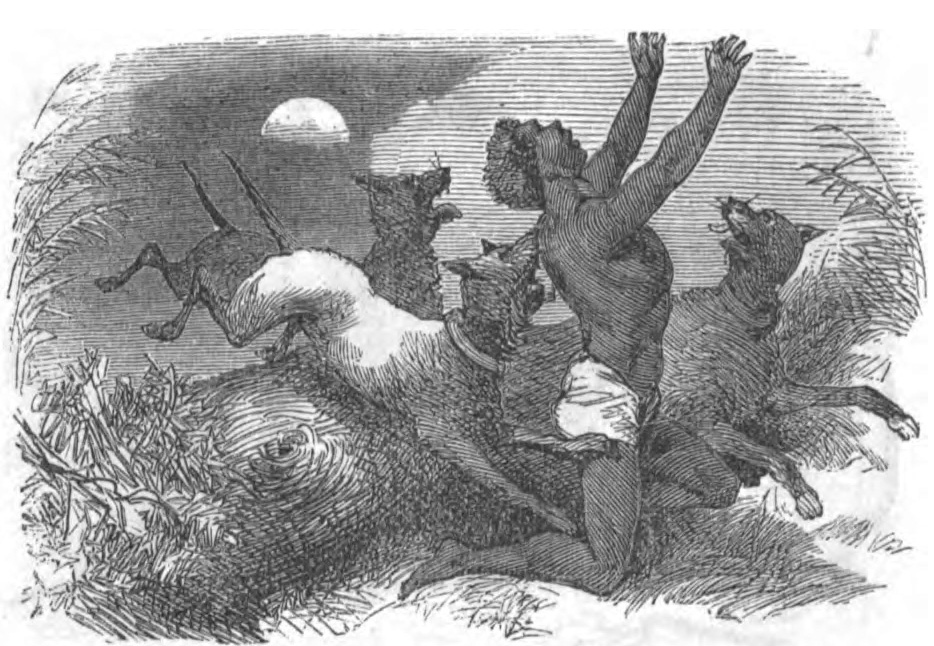 In the “Peculiar Institution” of slavery that solidified in the Southern States of America over the course of the nineteenth century, the enslaved population was often forced to negotiate with nonhuman actors, particularly when trying to escape bondage. The wildlife that proliferated throughout much of the south, particularly in the swamps found throughout the region, meant that running away entailed more than simply avoiding patrollers and masters.  Indeed, fugitive authors consistently noted the multiple dangers.  Solomon Northup, a particularly famous former slave, gave this account of his escape into a Louisianan swamp:

‘For thirty or forty miles it is without habitants, save wild beasts – the bear, the wild-cat, the tiger, and great slimy reptiles, that are crawling through it everywhere.  I staggered on, fearing every instant I should feel the dreadful sting of the moccasin, or be crushed within the jaws of some disturbed alligator.  The dread of them now almost equalled the fear of the pursuing hounds’ [Twelve Years a Slave, edited by Sue Eakin and Joseph Logsdon (1968), 103-104].’

Yet despite the myriad obstacles facing Northup, the wild creatures still did not frighten him as much as the pursuing hounds.  Such fears were not simply abolitionist hyperbole; the interviews of many former slaves in the 1930s reiterate the fact that, despite the numerous threats from wild animals, it was the use of trained dogs that appears to have most concerned them.

‘Fugitive Slaves and Bloodhounds, U.S. South, 1850s’, Anon., The Suppressed Book About Slavery! Prepared for Publication in 1857 (New York, 1864), facing p. 241. Image Reference, NW0198, , as shown on http://www.slaveryimages.org, compiled by Jerome Handler and Michael Tuite, and sponsored by the Virginia Foundation for the Humanities and the University of Virginia Library.

Former slaves claimed that masters, patrollers, or professional slave catchers would use ‘savage dogs, trained to hunt and follow the track of the poor colored fugitive’ [William J. B Anderson, Life and Narrative of William J. Anderson, Twenty-four Years a Slave (1857), 48]*.  Although it is possible that abolitionist accounts exaggerated their savagery at times, writings from slave-holders suggest they were not far off.  Bennett H. Barrow, one slaveholder from Louisiana, kept a detailed diary and frequently mentioned the importance of dogs in capturing runaways, as well as the terrible violence they could inflict: ‘hunting Ruffins Boy Henry, came across Williams runaway caught him dogs nearly et his legs off, near killing him’.  [Diary, Mss. 2978, Louisiana and Lower Mississippi Valley Collections, LSU Libraries, Baton Rouge, La, 440].   Barrow offers numerous other insights into the systematic use of dogs in slavery.  In October of 1844 he noted that ‘two men from Mississippi came last night with pack of negro dogs to hunt Miss Swifts negros’, and detailed the autonomous actions of the dogs themselves:

‘Struck the trail of 3 negros took the swamp impossible for any of the Persons along to keep up with the dogs mud knee deep & water from knee to hip deep, the dogs fought them out of hearing for 4 ½ hours, never witnessed greatre [sic] perseverance in any dogs after a deer, “___________get them all for want of a perseverance of the part of those attempting to follow the dogs [Barrow, Diary, 375-76].’

That masters had such faith in using dogs to root out runaways, particularly the more dangerous groups or “maroons”, was recognized by other former slaves who stated that ‘masters would be afraid to go hunt them without dogs’ [George P. Rawick (ed) The American Slave, Vol. 9, (1972), 102].  Dogs played a significant role in the repressive machinery of bondage and they were admired by whites and dreaded by slaves.  As one ex-slave stated: ‘if the colored folks had started an uprising the white folks would have set the hounds on us and killed us’ [Rawick (ed.), The American Slave, Vol. 8, (1972) 227]. Sorry, but that doesn’t sound like a choice to me Kanye West…  unless you favor dying! 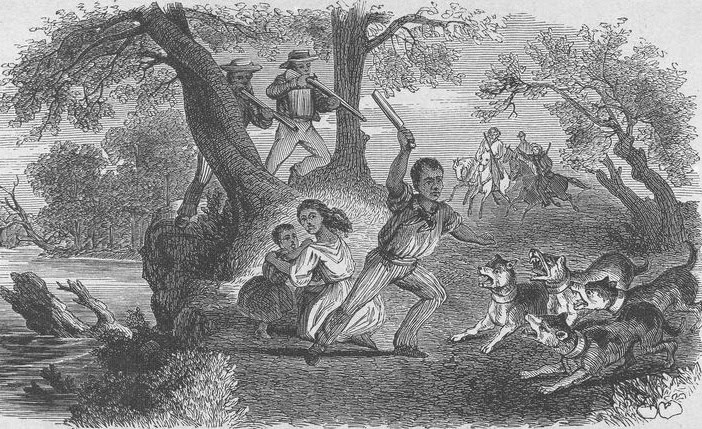 Yet slaves were not simply struck dead with fear in the face of the hounds.  Runaways would plan their escapes with the dogs in mind and had different tactics to avoid them.  Ex-slaves recalled attempts to make the dogs ‘los’ de scent’ in various different ways [John W. Blassingame, Slave Testimony (1977), 608].  One author, recalling slave life, noted that ‘Sam greased his feet with rabbit-grease, and that kept the dogs from him. Aunt Jane said to me that she did not know what Sam used, but it looked like Sam could go off and stay as long as he wanted when the white folks got after him’ [Octavia V. Rogers Albert, The House of Bondage (1890), 22*].  Another former slave remembered instead how her father would ‘wade in water’ so ‘dey [the dogs] can’t track him’. [Rawick (ed.), The American Slave, Supplement, Series 2, Vol. 4, (1977), 45].

Not all slaves struggled to avoid the dogs, choosing to confront their animal pursuers instead.  One ex-slave noted, ‘Dey had to keep knives from Pappy or when dem dogs catch him he would jus’ cut ‘em up so dey would die’ (Rawick, The American Slave, Vol.12 (1972), 309-10].  Although there is the risk of exaggeration, such violent responses by slaves are corroborated in Barrow’s diary [p.348]: ‘Mr Turnbulls Negros are cutting up a great many shines – 16 ran off & have defied him – are well armed killed two of his dogs while in pursuit of them’.  Despite the undeniable ferocity and tenacity of the dogs, suggestions that ‘the slave is obliged too often to yield and be torn by the savage dogs who gratify the vengeful dispositions of the masters’ do not do justice to the scale of conflict between runaways and dogs [Anderson, Life and Narrative, 48].  One, perhaps apocryphal, tale of pursuit by dogs has it that a slave who constantly attempted escapes simply ‘bit a dog’s foot off.  They asked him why he did that and he said the dog bit him and he bit him back’ [George P. Rawick (ed.), The American Slave, Vol. 9, (1972), 38].

Fugitive Slave Attacked by Dogs, 19th cent. (?),Isabelle Aguet, A Pictorial History of the Slave Trade (Geneva, Editions Minerva, 1971), plate 117 p.110; original source not identified, Image reference NW0200, as shown on http://www.slaveryimages.org, compiled by Jerome Handler and Michael Tuite, and sponsored by the Virginia Foundation for the Humanities and the University of Virginia Library.

Dogs clearly played a significant role in the repressive regime of slavery.  Owners and patrollers noted the importance of ‘Dog men’ and marveled at the ingenuity and ferocity of the dogs themselves [Barrow, Diary, 378].  Slaves feared the savage attacks and relentless pursuit, but also fought back and factored dogs into their escape plans.  This is obviously not to say that dogs and slaves were always pitted against one another; slaves could forge friendly relations with dogs that apparently aided them in flight, or appreciate their role in hunting: ‘’de colored folks lak to take deir dogs at night an’ go out in de swamps an’ tree a possum’ [Rawick, The American Slave, Supplement, Series 1, Volume 8, (1977), 1293].  Yet despite this, their role in maintaining slavery was well know and the tale of a rumoured emancipation that went terribly wrong neatly underscores how integral slaves saw dogs were to the slave system: ‘Taint no dream, nor no joke…”de time’s a’most yer. Der won’t be no mo’ whippin’, no mo’ oversee’s, no mo’ patrollers, no mo’ huntin’ wid dogs; everybody’s a gwine to be free, and de white mass’s a gwine to pay ’em for der work” [Mrs Kate E R. Pickard, The Kidnapped and the Ransomed (1856), 160*].  Slaves consistently noted the importance of dogs to the repressive regime of slavery; historians and others should too.

*William J. B Anderson, Life and Narrative of William J. Anderson, Twenty-four Years a Slave (1857); Octavia V. Rogers Albert, The House of Bondage (1890); Mrs Kate E R. Pickard, The Kidnapped and the Ransomed (1856) were all accessed on DocSouth.edu.  © This work is the property of the University of North Carolina at Chapel Hill.

Images shown are sourced from http://www.slaveryimages.org, compiled by Jerome Handler and Michael Tuite, and sponsored by the Virginia Foundation for the Humanities and the University of Virginia Library.

David Doddington is a 3rd year PhD student at the University of Warwick and his research relates to issues of gender and slavery in North America.  His thesis is entitled ‘Hierarchies and Honour among Enslaved Men’ and explores the manner in which different understandings and interpretations of masculinity and honour clashed with one another and directly affect the interactions of the enslaved.  Please get in touch with him via d.doddington@warwick.ac.uk or see dog slavery history

A Time When Black Slave Babies Were Used As Alligator Bait